Define an object that encapsulates how a set of objects interact. Mediator promotes loose coupling by keeping objects from referring to each other explicitly, and it lets you vary their interaction independently.
Design an intermediary to decouple many peers.
Promote the many-to-many relationships between interacting peers to "full object status".
Problem
We want to design reusable components, but dependencies between the potentially reusable pieces demonstrates the "spaghetti code" phenomenon (trying to scoop a single serving results in an "all or nothing clump").

In Unix, permission to access system resources is managed at three levels of granularity: world, group, and owner. A group is a collection of users intended to model some functional affiliation. Each user on the system can be a member of one or more groups, and each group can have zero or more users assigned to it. Next figure shows three users that are assigned to all three groups.

An alternate approach would be to introduce "an additional level of indirection" - take the mapping of users to groups and groups to users, and make it an abstraction unto itself. This offers several advantages: Users and Groups are decoupled from one another, many mappings can easily be maintained and manipulated simultaneously, and the mapping abstraction can be extended in the future by defining derived classes.

Partitioning a system into many objects generally enhances reusability, but proliferating interconnections between those objects tend to reduce it again. The mediator object: encapsulates all interconnections, acts as the hub of communication, is responsible for controlling and coordinating the interactions of its clients, and promotes loose coupling by keeping objects from referring to each other explicitly.

An example where Mediator is useful is the design of a user and group capability in an operating system. A group can have zero or more users, and, a user can be a member of zero or more groups. The Mediator pattern provides a flexible and non-invasive way to associate and manage users and groups. 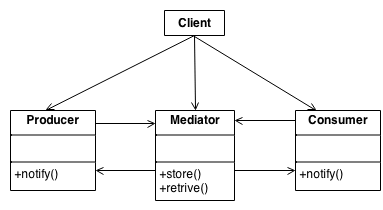 Colleagues (or peers) are not coupled to one another. Each talks to the Mediator, which in turn knows and conducts the orchestration of the others. The "many to many" mapping between colleagues that would otherwise exist, has been "promoted to full object status". This new abstraction provides a locus of indirection where additional leverage can be hosted.

The Mediator defines an object that controls how a set of objects interact. Loose coupling between colleague objects is achieved by having colleagues communicate with the Mediator, rather than with each other. The control tower at a controlled airport demonstrates this pattern very well. The pilots of the planes approaching or departing the terminal area communicate with the tower rather than explicitly communicating with one another. The constraints on who can take off or land are enforced by the tower. It is important to note that the tower does not control the whole flight. It exists only to enforce constraints in the terminal area. 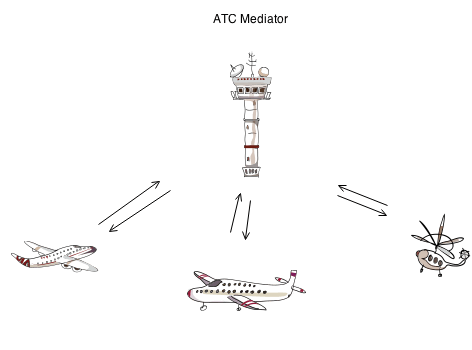